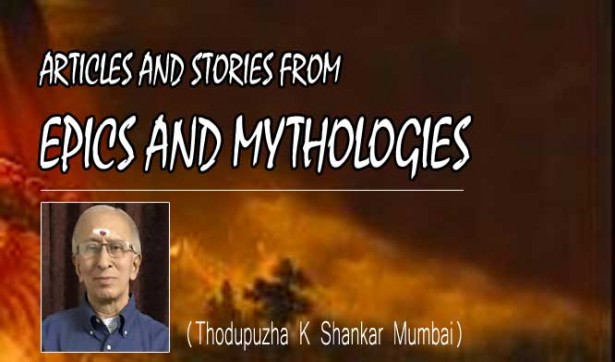 From the readings and sapthahams and Navahams I attended in Mumbai, I could gather some knowledge which I would like to share with my readers who have always evinced and expressed great interest and inquisitiveness to acquire the knowledge potential. I too strongly believe that the knowledge we gather from books and discourses and even discussions with knowledgeable souls should be shared with others from time to time. Otherwise, it remains futile like the wealth with a miser which is of no use. I am sure these stories and articles which contain good morals will be more helpful particularly, to the younger generation to instil in them a passion for learning our cultural heritage!
Here in these series of articles and stories, I wish to start with some striking stories which I recollect from Bhagavatham etc and I wish to begin with:

3.  THE SAINT AND HIS DISCIPLE

As usual, a saint and his disciples went to a lake for their daily bath. On the way the saint usually teaches and explains to them many worthy lessons and stories from the epics and mythologies. One day as they were descending the steps, the saint noticed a scorpion was struggling for life in the water and the saint wanted to save it out of sympathy. Soon he scooped it in his palms and dropped on the shore. While dropping the scoop of water, the scorpion stung in his palm causing lot of pain.
When he came back to the lake, he saw the same scorpion struggling again in the water and he took it out and left on the bank without any hesitation. This time also the scorpion stung the saint and he took it lightly. It came back to the water third time also and as the saint was about to help it out, one of the disciples asked him” Guruji, it has stung you two times and again why are you venturing to help it out”?
The saint looked at him and answered without any change in his countenance or attitude, “see my disciple, it has only shown it’s true nature and I have shown mine. Both are different and noncompromising. But, knowing fully its inherent nature, I have done my duty.”
Same way, in our life also we come across such people who even if we help them, forget everything and behave so strangely and ungratefully.
Ungratefulness, sometimes, seems to become an integral part of some people in course of time. But ignoring such perverted behaviour, some very generous souls, continue to help others. God is an apt and excellent example. He gives food and all basic necessaries and amenities to all ignoring whether he is a believer in GOD or not. A small example noted in a book is given below.
A very rich man was giving free food to all on his birth day. Only one condition was that he should say,” Narayana” before receiving the food. But one man refused to say the name as he was nonbeliever and hence was denied food by the rich man. Then God spoke to him in his dream in that   night” Hey man, you have denied him food as he did not utter MY name once, but in spite of knowing that he is a born-Nasthik (atheist) I have been giving him food for all these years right from his birth!” So many glaring examples are available in our PURANAS AND ITHIHASAS. He regretted his unawares.

What we should bear in mind always is that it is GOD ONLY who is giving food to all and we are only instrumental. One should never feel proud or elated that he is giving food to someone whether it is his parents or siblings or others, whereas it is given by the Lord Almighty only.!