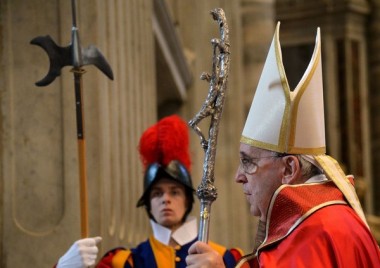 Pope Francis has given hope to gays, unmarried couples and advocates of the Big Bang theory. Now, he has endeared himself to dog lovers, animal rights activists and vegans.

Trying to console a distraught little boy whose dog had died, Francis told him in a recent public appearance on St. Peter’s Square, “Paradise is open to all of God’s creatures.” While it is unclear whether the pope’s remarks helped soothe the child, they were welcomed by groups like the Humane Society and People for the Ethical Treatment of Animals, who saw them as a repudiation of conservative Roman Catholic theology that says animals cannot go to heaven because they have no souls.

“My inbox got flooded,” said Christine Gutleben, senior director of faith outreach at the Humane Society, the largest animal protection group in the United States. “Almost immediately, everybody was talking about it.”

Charles Camosy, an author and professor of Christian ethics at Fordham University, said it was difficult to know precisely what Francis meant, since he spoke “in pastoral language that is not really meant to be dissected by academics.” But asked if the remarks had caused a new debate on whether animals have souls, suffer and go to heaven, Mr. Camosy said, “In a word: absolutely.”

In his relatively short tenure as leader of the world’s one billion Roman Catholics since taking over from Benedict XVI, Francis, 77, has repeatedly caused a stir among conservatives in the church. He has suggested more lenient positions than his predecessor on issues like homosexuality, single motherhood and unwed couples. So to some extent, it was not a surprise that Francis, an Argentine Jesuit who took his papal name from St. Francis of Assisi, the patron saint of animals, would suggest to a saddened child that his lost pet had a place in the afterlife.

Citing biblical passages that assert that animals not only go to heaven, but get along with one another when they get there, Francis was quoted by the Italian news media as saying: “One day, we will see our animals again in the eternity of Christ. Paradise is open to all of God’s creatures.”

Theologians cautioned that Francis had spoken casually, not made a doctrinal statement.

The Rev. James Martin, a Jesuit priest and editor at large of America, the Catholic magazine, said he believed that Francis was at least asserting that “God loves and Christ redeems all of creation,” even though conservative theologians have said paradise is not for animals.

“He said paradise is open to all creatures,” Father Martin said. “That sounds pretty clear to me.”

The question of whether animals go to heaven has been debated for much of the church’s history. Pope Pius IX, who led the church from 1846 to 1878, longer than any other pope, strongly supported the doctrine that dogs and other animals have no consciousness. He even sought to thwart the founding of an Italian chapter of the Society for the Prevention of Cruelty to Animals.

Pope John Paul II appeared to reverse Pius in 1990 when he proclaimed that animals do have souls and are “as near to God as men are.” But the Vatican did not widely publicize his assertion, perhaps because it so directly contradicted Pius, who was the first to declare the doctrine of papal infallibility in 1854.

John Paul’s successor, Benedict, seemed to emphatically reject his view in a 2008 sermon in which he asserted that when an animal dies, it “just means the end of existence on earth.”

Ms. Gutleben of the Humane Society said Francis’ apparent reversal of Benedict’s view could be enormous. “If the pope did mean that all animals go to heaven, then the implication is that animals have a soul,” she said. “And if that’s true, then we ought to seriously consider how we treat them. We have to admit that these are sentient beings, and they mean something to God.”

Sarah Withrow King, director of Christian outreach and engagement at PETA, one of the most activist anti-slaughterhouse groups, said the pope’s remarks vindicated the biblical portrayal of heaven as peaceful and loving, and could influence eating habits, moving Catholics away from consuming meat — which she asserted had already been happening anyway. “It’s a vegan world, life over death and peace between species,” she said. “I’m not a Catholic historian, but PETA’s motto is that animals aren’t ours, and Christians agree. Animals aren’t ours, they’re God’s.”

Whether the pope’s remarks will prove to be a persuasive new reason not to eat meat, a potentially worrisome development to the multibillion-dollar beef, pork, poultry and seafood industries, remains unclear at best. But they did cause discussion.

“As on quite a few other things Pope Francis has said, his recent comments on all animals going to heaven have been misinterpreted,” Dave Warner, a spokesman for the National Pork Producers Council, said in an email. “They certainly do not mean that slaughtering and eating animals is a sin.” Mr. Warner quoted passages from Genesis that say man is given “dominion over the fish of the sea and over the birds of the heavens and over every living thing that moves on earth.”

“While that ‘dominion’ means use for human benefit, it also requires stewardship — humane care and feeding — something all farmers who raise animals practice every day of every year,” Mr. Warner said.

Father Martin said he did not believe the pope’s remarks could be construed as a comment on vegetarianism. But, he said, “he’s reminding us that all creation is holy and that in his mind, paradise is open to all creatures, and frankly, I agree with him.”

Laura Hobgood-Oster, professor of religion and environmental studies at Southwestern University in Georgetown, Tex., and an expert on the history of dog-human interaction, said she believed that there would be a backlash from religious conservatives, but that it would take time.

“The Catholic Church has never been clear on this question; it’s all over the place, because it begs so many other questions,” she said. “Where do mosquitoes go, for God’s sake?”

What was Gandhi’s Evaluation of RSS?